Aedes aegypti is a so-called holometabolous insect. This means that the insects goes through a complete metamorphosis with an egg, larvae, pupae, and adult stage. The adult life span can range from two weeks to a month depending on environmental conditions. The life cycle of Aedes aegypti can be completed within one-and-a-half to three weeks (see figure 1). 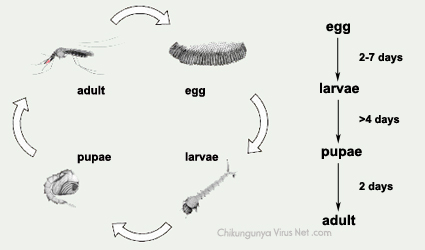 Figure 1: Life cycle of Aedes aegypti: there is an aquatic phase (larvae, pupae) and a terrestrial phase (eggs, adults)

Egg
After taking a blood meal, female Aedes aegypti mosquitos produce on average 100 to 200 eggs per batch. The females can produce up to five batches of eggs during a lifetime. The number of eggs is dependent on the size of the bloodmeal. Eggs are laid on damp surfaces in areas likely to temporarily flood, such as tree holes and man-made containers like barrels, drums, jars, pots, buckets, flower vases, plant saucers, tanks, discarded bottles, tins, tyres, water cooler, etc. and a lot more places where rain-water collects or is stored. The female Aedes aegypti lays her eggs separately unlike most species. Not all eggs are laid at once, but they can be spread out over hours or days, depending on the availability of suitable substrates. Eggs will most often be placed at varying distances above the water line. The female mosquito will not lay the entire clutch at a single site, but rather spread out the eggs over several sites.

The eggs of Aedes aegypti are smooth, long, ovoid shaped, and roughly one millimeter long. When first laid, eggs appear white but within minutes turn a shiny black. In warm climates eggs may develop in as little as two days, whereas in cooler temperate climates, development can take up to a week. Laid eggs can survive for very long periods in a dry state, often for more than a year. However, they hatch immediately once submerged in water. This makes the control of the dengue virus mosquito very difficult.

Larvae
After hatching of the eggs, the larvae (see figure 2) feed on organic particulate matter in the water, such as algae and other microscopic organisms. Most of the larval stage is spent at the water's surface, although they will swim to the bottom of the container if disturbed or when feeding. Larvae are often found around the home in puddles, tires, or within any object holding water. Larval development is temperature dependent. The larvae pass through four instars, spending a short amount of time in the first three, and up to three days in the fourth instar. Fourth instar larvae are approximately eight millimeters long. Males develop faster than females, so males generally pupate earlier. If temperatures are cool, Aedes aegypti can remain in the larval stage for months so long as the water supply is sufficient.

Pupae
After the fourth instar, the larvae enters the pupal stage (figure 3). Mosquito pupae are mobile and respond to stimuli. Pupae do not feed and take approximately two days to develop. Adults emerge by ingesting air to expand the abdomen thus splitting open the pupal case and emerge head first.